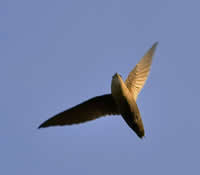 Audubon Minnesota recognized Preston as having the largest and most active Chimney Swift population in the state. Swifts feed exclusively on flying insects, like mosquitoes, which is “good news” for bikers and campers in Preston. Gather nightly at dusk at the Trailhead parking lot April through August to watch these amazing birds dive by the hundreds into their nighttime roosts.

History of the Towers

For several years, Minnesota Audubon has sponsored a Chimney Swift Sit where people sit and count the number of Swifts that fly down into masonry chimneys to roost for the night. Large chimneys are indispensable for the birds to roost in and gather before migration, while nesting pairs with a couple of helper birds use small chimneys to raise their young.

Thanks to the persistence of Carlisle Corson (whose family owns the old schoolhouse in downtown Preston that has been re-purposed into the Trailhead Suites), a count done on August 29, 2011 recorded 1,100 Swifts, more than any of the over 300 counts compiled in Minnesota. The large, old chimney, deteriorating from age and lightning strikes, was unsafe, with bricks from the top occasionally falling to the ground below. Rather than letting it be torn down, a group of citizens and organizations came together to save the chimney. 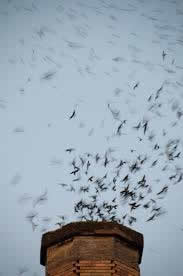 Greg Munson, former director of Quarry Hill Nature Center in Rochester, had a plan to not only fix the chimney, but to educate people about Chimney Swifts by building a 16 foot tall demonstration chimney by the Preston-Harmony Bicycle Trail head near the old schoolhouse. The Zumbro Valley Audubon Society agreed to be the coordinating organization, and worked with Minnesota Audubon, the Non Game Wildlife Division of the Minnesota DNR, and the City of Preston, all of whom contributed the needed support to get the project done. ZVAS also obtained a $1000 grant from the Preston Area Community Foundation. Corson supervised the work on the big chimney while Munson had the smaller one built in August of 2012. On September 1st, 525 Swifts were counted using the restored chimney, and some 25 went into the demonstration chimney, investigated, but came back out.

This new demonstration chimney is a helpful addition for these struggling birds. Zumbro Valley Audubon is proud to have contributed so much to this important effort.

About the Chimney Swift
Over recent centuries, chimney swifts have learned how to survive in close proximity to humans. Originally nesting in hollow trees, they switched almost entirely to masonry chimneys as dead trees were removed from the landscape. Now, the capping of chimneys creates a severe shortage of nesting sites.

Unique Survival Adaptations
Their long claw-like feet and stiff bristles on their tails are used to cling to rough, vertical surfaces. While hundreds or thousands of swifts may roost in a large chimney, only one nest can be found in any chimney, large or small.

Migration
After thousands of swifts were banded in the early 1900’s, the swift’s winter home was finally discovered in 1944. A graduate student studying indigenous tribes in Peru saw tribe members wearing bands taken from swifts they had most likely eaten. After wintering in South America, swifts generally arrive in Minnesota in late April and leave again in early fall.

Did you know chimney swifts...